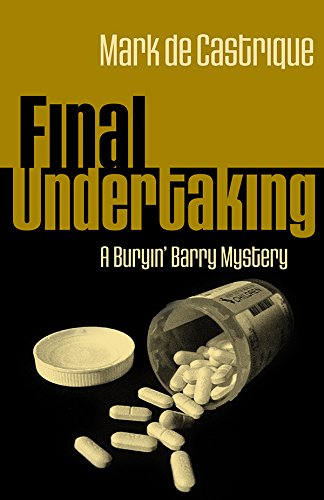 In this colorful, engrossing fourth adventure for funeral home owner and former cop Barry Clayton (after 2006's ), an ordinary afternoon in Gainesboro, N.C., is interrupted when an elderly man visiting from Florida opens fire on Main Street. The shooter, Mitch Kowalski, hits a handful of people, including sheriff Tommy Lee Wadkins, who, from his hospital bed, asks Clayton to take over the investigation. Clayton suspects the recent death of Kowalski's octogenarian wife had something to do with his inexplicable shooting spree. When Clayton heads to the Sunshine State to dig a little deeper into Kowalski's past, he learns that Kowalski's late wife had been taking medicine that hadn't been prescribed to her. More people will die before Clayton gets to the bottom of a nefarious medical scam. De Castrique has married the complexity and fast pace of a police procedural with the folksy setting and lovable characters of a cozy.