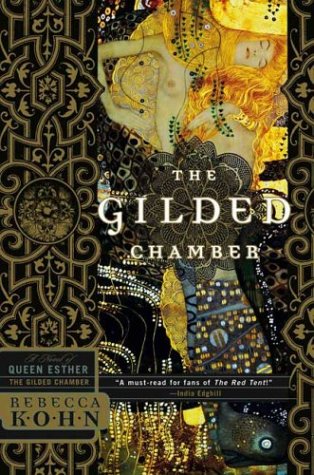 THE GILDED CHAMBER: A Novel of Queen Esther

In this measured, eloquent retelling of Jewish heroine Esther's rise from orphanhood to queen of the Persian empire, Kohn brings psychological nuance and stately elegance to the ancient biblical tale that is the basis for the Jewish holiday of Purim. Narrating in the first person, Esther (born Hadassah) tells how she is forcibly taken from her home to the royal harem of King Xerxes in Babylon. Her uncle Mordechai, a high-ranking treasury official in the king's service, warns her, "Do not reveal your people or your kindred.... Let yourself be known only as Esther, foster daughter of Marduka the Babylonian." The novel is by and large faithful to the biblical account and often quotes from it verbatim. Yet Kohn deftly fills the gaps and resolves the ambiguities in the Book of Esther with creative storytelling and historical research. As Esther recognizes her strengths and responsibilities and learns the ways of the palace, so do we; the oppressive closeness of the harem ("the lingering odors of perfume, food, and lamp oil"), the pervasive abuse, the fragile alliances and deadly schemes all come to life. Kohn's Esther has a will of steel and knows how to manipulate lusty, impetuous Xerxes, but she longs for a simpler life. Her sacrifices are finally rewarded when the king's trusted courtier Haman issues a decree ordering the slaughter of the Jews, and Esther is in a position to be able to save her people. Though the novel's pace slows at times, Kohn paints a convincing, complex picture of Esther, and her descriptions of the palace and its secrets will hold readers spellbound.