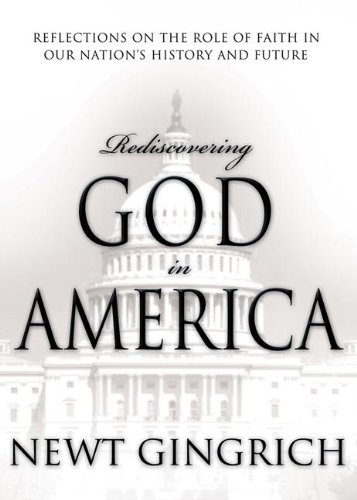 Rediscovering God in America: Reflections on the Role of Faith in Our Nation's History and Future

This brief mandate by Gingrich, the architect of 1994's conservative congressional manifesto "The Contract with America," opens with a battle cry: "There is no attack on American culture more deadly and more historically dishonest than the secular effort to drive God out of America's public life." The book's arguments are predictable: Gingrich claims that references to God are sprinkled everywhere in our nation's founding documents; that most Americans believe in God; and our classrooms and courtrooms are the laboratories where such belief is being irrevocably eroded. He trots out quotations from founding fathers that suggest their allegiance to Christianity or at least to theism, but conveniently ignores evidence that some of these men—particularly Benjamin Franklin and Thomas Jefferson—believed religion should have little, if any, role in the nation's government. If the book's thesis is tired and essentially unpersuasive, its unique contribution is its innovative, even brilliant, method of organization. Gingrich presents his arguments as a "walking tour" of the nation's capital, beginning with the National Archives and winding through the Lincoln and Jefferson memorials, Supreme Court, Library of Congress, Capitol, White House and other sites. This structure does much to freshen up a book that is otherwise indistinguishable from prior offerings by Pat Robertson and David Barton.