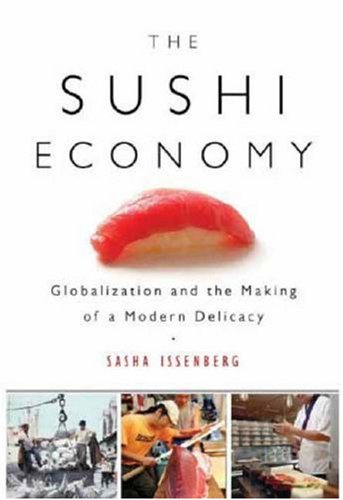 The Sushi Economy: Globalization and the Making of a Modern Delicacy

In this intriguing first book, Philadelphia-based journalist Issenberg roams the globe in search of sushi and takes the reader on a cultural, historical and economic journey through the raw-fish trade that reads less like economics and more like an entertaining culinary travelogue. In the years since the end of WWII, the practical protein-and-rice delicacy once unknown outside Japan has become so commonplace that the elements of its trade affect a far-flung global network of fanatics, chefs, tuna ranchers and pirates. While the West reached out for things Japanese, from management techniques to Walkmans, the growth of the market for quality fish, especially , the bluefin tuna beloved by sushi eaters everywhere, paralleled Japan's rise from postwar ruin to 1980s economic powerhouse and into its burst-bubble present. Issenberg follows every possible strand in this worldwide web of history, economics and cuisine—an approach that keeps the book lively with colorful places and characters, from the Tokyo fish market to the boats of North Atlantic fishermen, from tuna ranches off the coast of Australia to the sushi bars in Austin, Tex. He weaves the history of the art and cuisine of sushi throughout, and his smart, lively voice makes the most arcane information fascinating.