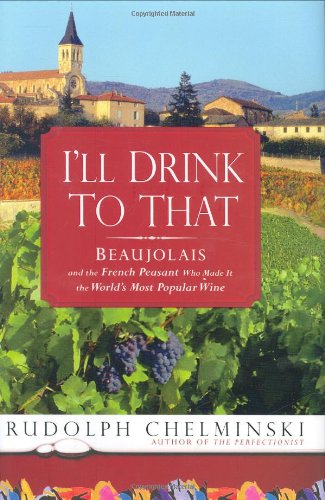 I'll Drink to That: Beaujolais and the French Peasant Who Made It the World's Most Popular Wine

Francophile Chelminski ( ) offers up a feisty defense of Georges Duboeuf, who singlehandedly put Beaujolais, the grape and the region, on the culinary map. Unlike the better established regions of Burgundy and Bordeaux, the small grape growers of Beaujolais—a ribbon of land between Lyon and Mâcon, its capital Beaujeu—held to the growing of the inferior gamay, which flourished in the region despite the attempts by the Romans to eradicate it. Surviving phylloxera and grafting from plants of American roots, the humble Beaujolais became a favorite wine of Lyon largely because of the excellence of its , or new wine, which was available by St. Martin's Day, November 11. In Chelminski's circuitous path, enter young Duboeuf, on his family winery at Chaintre, who decided by 1951 to circumvent the big dealers and set up his own wine-tasting cellar. Armed with two of his own bottles, he pedaled over to Paul Blanc's famous restaurant Le Chapon Fin down the road, and history was made: Duboeuf Wines is the #1 exporter of French wines to the U.S. Chelminski offers a stylish history of French wine-making, and an unblushing tribute to Duboeuf's achievements.