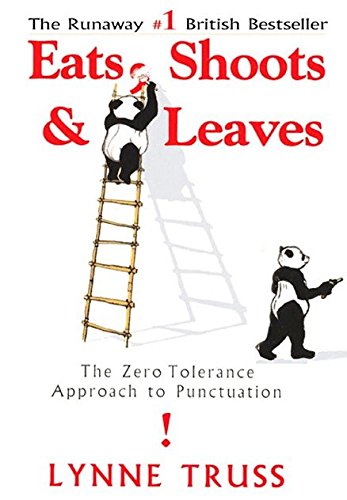 Who would have thought a book about punctuation could cause such a sensation? Certainly not its modest if indignant author, who began her surprise hit motivated by "horror" and "despair" at the current state of British usage: ungrammatical signs ("BOB,S PETS"), headlines ("DEAD SONS PHOTOS MAY BE RELEASED") and band names ("Hear'Say") drove journalist and novelist Truss absolutely batty. But this spirited and wittily instructional little volume, which was a U.K. #1 bestseller, is not a grammar book, Truss insists; like a self-help volume, it "gives you permission to love punctuation." Her approach falls between the descriptive and prescriptive schools of grammar study, but is closer, perhaps, to the latter. (A self-professed "stickler," Truss recommends that anyone putting an apostrophe in a possessive "its"—as in "the dog chewed it's bone"—should be struck by lightning and chopped to bits.) Employing a chatty tone that ranges from pleasant rant to gentle lecture to bemused dismay, Truss dissects common errors that grammar mavens have long deplored (often, as she readily points out, in isolation) and makes elegant arguments for increased attention to punctuation correctness: "without it there is no reliable way of communicating meaning." Interspersing her lessons with bits of history (the apostrophe dates from the 16th century; the first semicolon appeared in 1494) and plenty of wit, Truss serves up delightful, unabashedly strict and sometimes snobby little book, with cheery Britishisms ("Lawks-a-mussy!") dotting pages that express a more international righteous indignation.