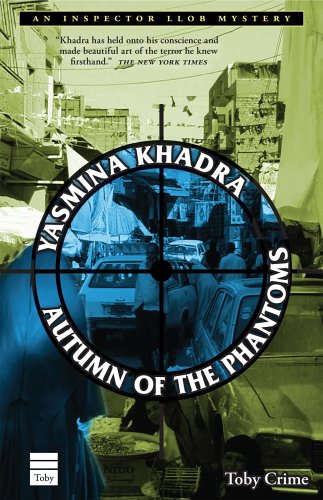 Autumn of the Phantoms

Khadra's third Inspector Llob mystery (after 2005's ) searingly portrays present-day Algeria's brutal realities. Llob faces expulsion and death threats after writing—under the pen name Yasmina Khadra—a series of books detailing Algeria's civil war and corruption from the inside out. This narrative doubling, which might seem overly postmodern in another story, deepens the menace hanging over Llob. Following the funeral of one of Llob's oldest friends, killed by the radical Islamists who are waging war on the Algerian government, Llob lives through bombings, terrorist attacks and waves of threats from superiors who could have him killed without the slightest repercussion. Like an existential novel, Llob's book aims to speak hard truths in simple language, and there's more than a touch of Camus in its bleak view of a society in which power and cruelty are synonymous. Khadra is the pseudonym of Mohammed Moulessehoul, an Algerian now exiled in France and best known as the author of (2004).