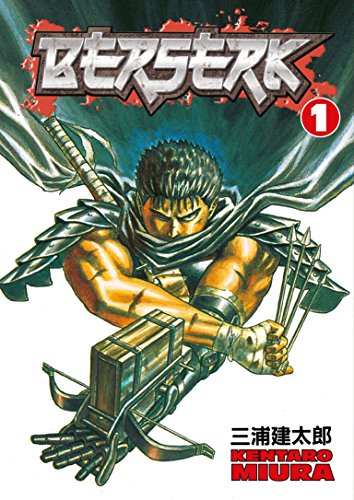 This ultraviolent fantasy manga is the first in a series about a cursed lone wanderer with a tragic fate and a cast of bio-horror demons. Deserving its name, offers a montage of merciless violence and thrilling action sequences in a blend of pure fantasy and graphic horror. Set in a netherworld of a science fiction Dark Age, the story's antihero is the appropriately named Guts (he's shameless, relentless and all strength). Guts is on a quest to avenge a flesh-eating demon ruler and lift his demon curse. Guts carries the sign of the curse on his neck—a mysterious brand that attracts evil demons, spirits and the undead. Armed with a massive sword and metal cannonball-shooting prosthetic arm, he maneuvers through a cast of oddities: a pus and blood fetus monster, a giant cobra and an -like biomechanical monster. They all plague him in nightmares and waking life. Anyone who interacts with Guts is doomed, too, as either his victim or the incidental sufferer of his demon adversaries, and he winds up leaving a trail of carnage in every direction. Guts's unlikely companion, Puck, is an androgynous, winged elf who possesses magic healing powers, and while Guts scoffs at the sprite, Puck proves to be an invaluable buddy. Published in Japan in 1989, this work has a style characteristic of other 1980s manga, with sparse dialogue, spectacular action sequences and gritty character art. The pencil shading and use of shadows lend an ominous tone, and the frenetic and intense pace make a strong addition to the fantasy-horror manga genre.