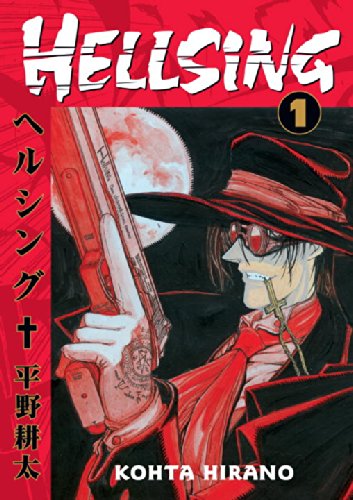 Another in a long line of manga featuring an off-kilter hero, this lively tale about vampire hunters features the eponymous top-secret organization based in England that's called on for only the toughest jobs. Hellsing's top vampire hunter is Alucard, a lanky figure in an oversized hat and a duster that swirls dashingly as he blows bad guys to smithereens with his arsenal of enormous firearms. Alucard, it turns out, is actually a vampire himself, and just why he's tearing up his own kind is open to question, but then, doesn't lend itself to much deep contemplation. It's mostly a fun, violent romp. In the first story readers meet a young policewoman who joins the undead after becoming an innocent victim in a battle. Police Girl, as she's known, comes to the organization via Integra, Hellsing's leader, and her adaptation to her new life affords some amusing moments. In a flashback, readers learn how Integra took over Hellsing and how she first met Alucard when he rescued her from her own murderous relatives. Later, the heroes nearly meet their match in Father Alexander Anderson, a superhuman priest who works for Section XIII, the Vatican's own vampire division. The bloody battle is accompanied by some rather awkward religious sparring between the Catholic Church and Hellsing, which is sworn to protect, believe it or not, the Protestant Church. It's goofy details like this that give the book some charm and energy. Hirano's storytelling is easy to follow, as stylish close-ups of the "we're-groovy-and-we-know-it" characters explode into violent full-page illustrations of all-out mayhem.