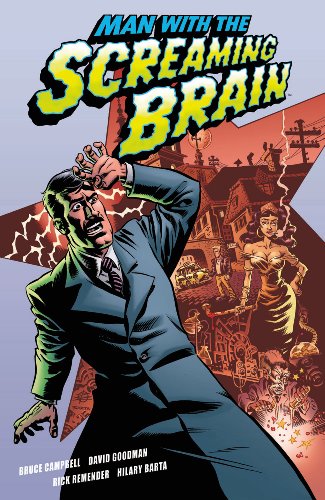 Man with the Screaming Brain

A goofy romp through a bubbling cauldron of classic sci-fi themes—brain transplants, re-animated corpses, mad scientists's labs, and sexy robots—all in the glossy, gleefully noir setting of the Eastern Bloc country of Bravoda. This comic-book version of Campbell's film of the same name is a dark fantasy of what can happen when an American industrialist, one William Cole, goes behind the Iron Curtain with the intention of investing in a tax shelter and meets a beautiful, murderous local, one Tatoya. She manages to put him in a compromising position before she bumps him off. Happily for Cole, the local mad scientist has been keeping an eye out for fresh bodies, and the businessman is brought back to life, although half of his brain has been replaced by that of a former KGB spy, Yegor. A very dangerous man when he was alive, Yegor, too, was entangled with Tatoya—now Cole and Yegor must join forces, and make the body they share find Tatoya, and, possibly, reunite with Cole's understandably angry wife. The fabulous mayhem is rendered in pumped up, day-glo, pulp-style art—it's a ton of fun.