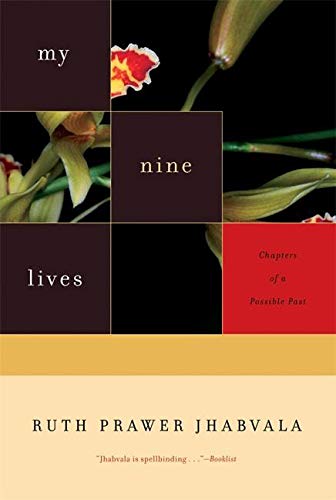 MY NINE LIVES: Chapters of a Possible Past

After 17 books thorny with existential and intellectual issues, Jhabvala has unleashed her imagination to rewrite her own past. In nine pieces of "autobiographical fiction" set in New York, London and India, septuagenarian Jhabvala imagines alternative paths her life might have taken. While the narrator of each story has a different given name, in an Apologia Jhabvala states that "the I of each chapter—is myself." The stories do not attempt to cover her life fully (her long career with Merchant and Ivory is never alluded to) nor do they reveal specific personal details. Instead, certain circumstances and psychological attitudes prevail. The narrator is usually an only child of a wealthy German-Jewish father who fled the Nazis and a beautiful, vain, erstwhile actress mother. Both parents assume that their daughter will become an intellectual. For these reasons and because of her own predilection for exile, the narrator has never fully assimilated anywhere. The narrator's interest in existential questions and in Eastern religion leads to spiritual quests to India, where she marries or finds a lover. A ménage à trois or à quatre figures in nearly every story, as do marriages that do not survive the strain of relations with a third party. In a recurrent situation, a man willingly raises another man's child as his own. The habits of creative geniuses—a pianist, an artist, a philosopher—animate some plots. A strain of sadness is pervasive, as is the assumption that one's fate cannot be changed. Though these similarities become apparent as one reads the collection, each story is sinewy with compressed emotion and intellectual energy, as well as the poignancy of a thwarted search for love. Each can stand on its own as a finely crafted example of an accomplished storyteller's art. Pen-and-ink drawings by C.S.H. Jhabvala introduce each chapter.