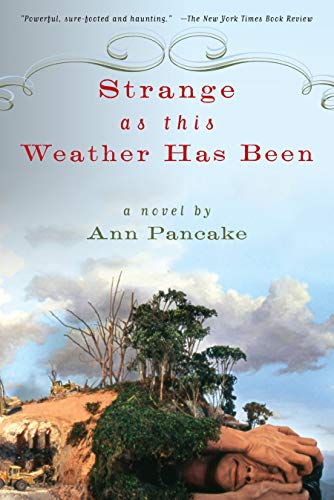 Strange as This Weather Has Been

A hard-living Appalachian family weathers a contemporary coal boom in the debut from West Virginia native Pancake. Soon after their first meeting in the 1980s, college freshman Lace See and 15-year-old local boy James Makepeace Turrell (“Jimmy Make”) conceive their first child. Nearly 20 years later, Lace is uneasily settled as a mother to Jimmy's four children as a flurry of strip mining and clear cutting make the mountains she has known since childhood unrecognizable. One summer right after a strip-mining induced flood, things come to a head. Lace's environmental activism ramps up; daughter Bant, working at a local motel, discovers her allegiance to the mountains and her sexuality; each of Lace and Jimmy's three sons (Corey, Jimmy and Dane) is touched in turn by the collapsing economy and environment. Lush descriptions of the landscape are matched with a hurtling stream-of-consciousness narration to great effect: one doubts neither the characters' voices nor their places in a very complex poverty.