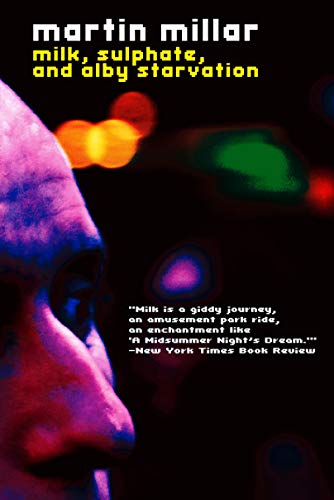 A neurotic British hypochondriac is at the center of Millar’s frenetic, eccentric novel, first published in the U.K. in 1987. “[R]agged” paranoid Alby Starvation barely makes ends meet in his career dealing speed in Brixton, and he’s constantly suffering from intense stomach pain. When he determines the cause of his internal discomfort is a severe allergy to milk, he creates a media firestorm about how milk could be “potentially poisonous.” Dairy sales plummet and the Milk Marketing Board takes out a contract on Alby’s head. Enter lonesome hit woman June, who apparently isn’t the only person gunning for Alby: a cryptic Chinese man with a hidden agenda has it in for Alby, too. Calamity ensues as Alby becomes intimate with June and begins to fear he may have contracted AIDS. The dizzying array of characters and perspectives whips Millar’s madcap story into a potent blitz that runs at full throttle through the satisfying conclusion. Fans of Irvine Welsh will love Millar’s singularly entertaining tale of suspicious minds.