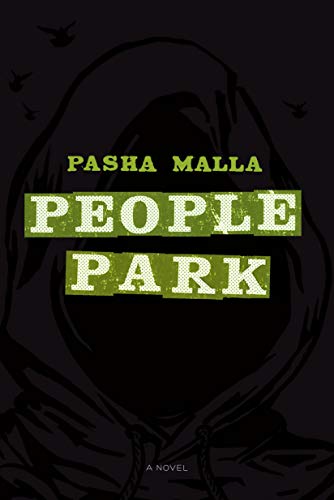 Reviewed by Owen King. If there is one surefire audience for Pasha Malla’s massive, messy, entertaining, funny, fatiguing novel People Park, it can be found among those fiction lovers who also have a taste for amateur cartography. The author’s descriptions of the imaginary island city where his story is set are so thorough and zonate that any reader worth her salt ought, when finished, be able to find her way around town—from UOT (Upper Olde Towne) to LOT (Lower Olde Towne), Knock Street, Topside Drive, Mount Mustela, People Park, and a dozen other scattered locations—without a local guide. \tAcross Malla’s painstakingly-created panorama we follow the movements of a lengthy roster of characters over the course of a long weekend, the great occasion of which is the “Silver Jubilee” of People Park, a green space that was created by the controversial razing of a housing project. These characters include, among others, Pearl, a former basketball star, arrived home with mixed feelings in the company of her far-less-than-perfect family; Pop, an amusingly deranged activist who resides in a land-bound houseboat; tough and frustrating Adine, who spends a major portion of the novel literally in the dark, blinded by a pair of opaque goggles that she has donned for artistic reasons; her tragic, disturbed brother Sam, who eventually does something terrible to himself with a microwave; and, most elaborately, multiple members of the New Fraternal League of Men (NFLM), a khaki-wearing, quasi-police force that also programs a talk show called Salami Talk. Acting upon them all is Raven, a maleficent, track-suited magician, whose enchantment vaporizes the bridge to the mainland and sets the stage for disaster. \tIf the above sounds like a lot, let me tell you, that’s not a quarter of it. Malla is a fabulously gifted writer and People Park showcases all of his gifts. The various vernaculars spoken by the characters are a consistent delight, with particular credit being awarded to the lingo of the NFLM. His descriptions of the devastation that serves as a backdrop to much of the novel’s second half are very fine—the rising floodwaters around a hilltop “evoked a kneecap jutting from a filling tub.” Meanwhile, the novel’s most atypical section is also its best, an unsparing portrait of Sam and Adine’s horrific childhood in the housing project that was leveled to make way for the titular park. This contained story is heartbreaking. \tMalla can do everything well, but that’s also the drawback of People Park: he’s determined to do just that—i.e., everything. The cast is ultimately so large and the chaos that ensues so massive that as the characters hurry, or are swept, from one section of the city to another, and another, and another, they lose definition. This is meant to serve as a caution; it shouldn’t obscure the numerous pleasures of Malla’s setup or his considerable talent. People Park is a sopping hoagie of a novel: well worth it if you have the appetite, but be careful when you eat it. There’s stuff falling out all over the place. Owen King is the author of three books, including, most recently, Double Feature (Scribner). His fiction and nonfiction have appeared in Fairy Tale Review, One Story, Paste Magazine, and Prairie Schooner, among others.
close
Details