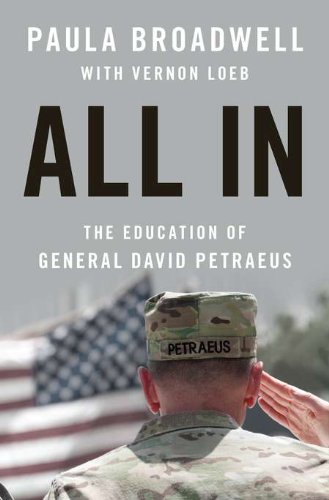 All In: The Education of General David Petraeus

This is an authoritative and engrossing look at General David Petraeus—now director of the CIA—, his impact on the Army (particularly in terms of counterinsurgency tactics), and his command of the NATO and U.S. forces during the surge in Afghanistan, including accounts from his battalion commanders and others. Broadwell gives what Petraeus himself might term a "granular understanding" of the general, detailing his life, motivations, mentors, education, postings, and command style in an engaging manner, only slightly marred by the copious use of acronyms (though the book does feature a three-page guide to the latter). Broadwell, a West Point graduate, veteran, and counterterrorism policy expert, first met Petraeus in 2006 as a graduate student and later conducted a case study in Petraeus' leadership which concurrently became a thesis for her University of London Ph.D. in public policy and this book. She had unique access to Petraeus, his staff and his colleagues, and it shows in the details—from his father's exhortations to focus on "Results, boy!," to the informal, handwritten note of appreciation Petraeus received from former Defense Secretary Robert Gates. The book veers from biography to military history to counterinsurgency manual, and though Broadwell fails to sufficiently explore criticisms of Petraeus, the back-and-forth in topic and theme ultimately render a fuller context within which readers might understand the general and his remarkable impact. (Jan.)
close
Details