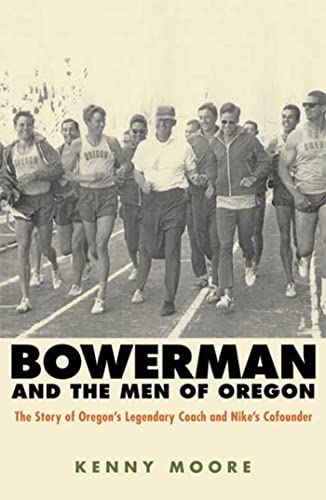 Bowerman and the Men of Oregon: The Story of Oregon's Legendary Coach and Nike's Co-Founder

The University of Oregon's running coach Bill Bowerman had revolutionary ideas for his time (the 1950s, '60s and early '70s). He instituted rest days, researched training methods and experimented with runners' clothing; his runners repeatedly broke the four-minute mile. Moore, a former Olympian and writer, trained with Bowerman, and he writes of his mentor with a veneration that frequently crosses into hagiography. For example, Bowerman hazed his new runners by urinating on them in the shower and branding them with a hot set of keys, a practice Moore calls "an initiation rite, not unlike the ritual circumcision some African tribes use to make men out of boys." Bowerman was a central player in the building of Nike, although, despite the subtitle, this is just a small part of his story. The focus is on running. Bowerman was at many important moments of running history; he trained Steve Prefontaine, coached at the Munich Olympics and developed Nike's waffle-soled shoe. Moore's writing distinguishes his book from others in the running genre; even smaller races are grippingly recounted. While far from objective, Moore's work is an inspiring and touching look at the man who made Eugene, Ore., the running capital of the U.S. Photos.