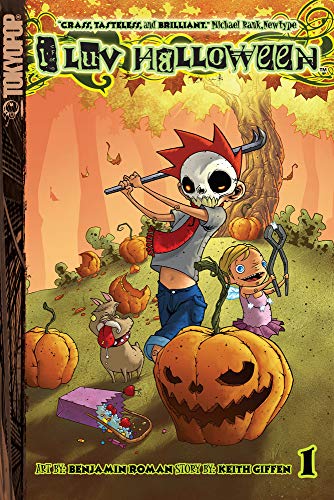 Finch and his sister, Moochie, are all ready for Halloween, and they look adorable. Finch is dressed as a zombie, while Moochie is the Tooth Fairy. By the time we realize that Moochie is stealing teeth from a house full of dead bodies, and Finch knows more about zombies than any child has a right to, we've already been drawn into their cute but gruesome world. Giffen ( ) and Roman ( ) have concocted a black comedy that reads as if Quentin Tarantino and Tim Burton had collaborated on a Halloween heist story. As the story progresses, a mysterious kid dressed as a devil who might just be one, razor blades in apples, a boy named Mr. Kitty with a breast fetish, a dead dog, a missing bra and much more mix together for a lively and inventive tale. Giffen's darkly humored script draws laughs from such things as evisceration while capturing the childlike glee at dressing up and walking by a scary graveyard. He also leaves plenty of mysteries for the next two volumes to solve. Cocreator Roman's art is occasionally too detailed for the small pages, but he excels at unique character designs and macabre details. Full of ghoulish tricks, is a seasonal treat that the not easily offended will thoroughly enjoy.