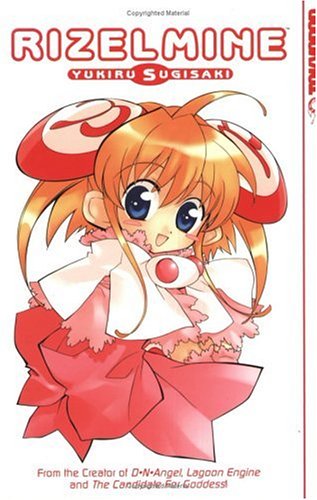 Tomonori Iwaki was a typical 15-year-old boy—until he arrived home from school one day to find that he was married. Rizel is the result of the secret Protoman Kind project; she is the first human made entirely of nanobots. But her development has halted at a 12-year-old stage, and the only thing that can help her become human is love. So her "Papas," three government agents devoted to Rizel's safety, approve her marriage to Tomonori, who is dismayed at his marital state—he'd rather be hitched to his sexy homeroom teacher. Rizel -bumbles and pines for Tomonori's affection, and at each rebuff disaster ensues. But though he tries to flee his unwanted wife, a secret trauma in his past binds the two of them together. Rizel is a modern-day Pinocchio, but her quest for humanity is swallowed in a frothy, cloying cuteness and incoherent action. She's as persistent and annoying in her pursuit of Tomonori as a Tamagotchi Virtual Pet. Since Rizel's only reference for romance is the shojo manga she reads, perhaps that's not surprising. Though spawned a popular anime, this irrational and unsettling love story will disturb all but the most dedicated shonen manga otaku.