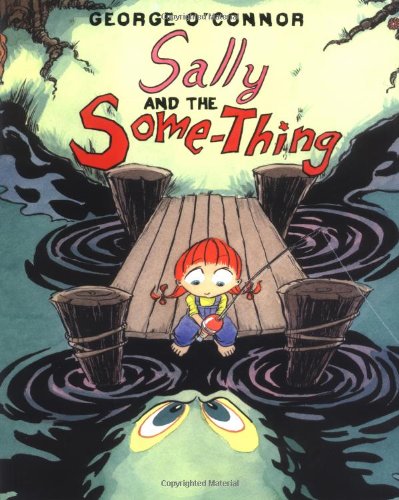 Sally and the Some-Thing

O'Connor ( ) introduces overall-wearing Sally with a vivid imagination, who bikes off from her boring house with fishing rod in tow, determined "to catch something." A full-bleed spread, in hues of swampy green, shows the winding path Sally takes from her little wooden house to the pond, "past the big mud puddle... past the spooky old tree... past Mr. Tilly and his crazy dog" and conveys Sally's sense of the world as her playground. Her bright red pigtails contrast with gnarled moss-green trees and eerily still pond water, underscoring her self-confident spirit. When a bulgy-eyed swamp creature " ... ... its way up onto the dock," Sally responds, " !" Humorous illustrations and deadpan commentary capture the challenges the new friends encounter ("The tea party was a disaster. And the less said about the bicycle, the better"). The terrified Some-Thing rides out of control before catapulting off the bike, which lands in a tree. Some-Thing's game suggestions prove equally unsuccessful (e.g., snail races), thus prompting the two to create mutually satisfying activities. A highlight depicts Sally taking an exhilarating ride through the treetops on Some-Thing's back. Children will likely request repeated readings of this delightful romp. Ages 4-8.