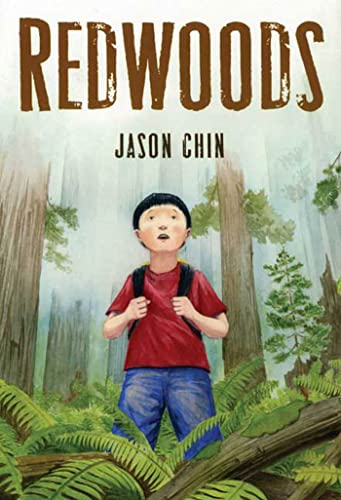 Playing with the notion of just how immersive a book can be, illustrator Chin ( ) makes his authorial debut with a clever exploration of coast redwoods. The framing story opens with a boy finding a copy of on a subway station bench (he's even on the cover). He delves in, and facts about the ancient trees spring to life around him: as he reads in a subway car that “there are trees alive today that first sprouted during the Roman Empire,” he is flanked by two figures from that era, driving home the point. Emerging from the station to find himself in the middle of a redwood forest, his adventures mirror what he's learning—standing in a redwood-made rain shower and glimpsing the Statue of Liberty in the midst of the forest (the tallest redwood is six stories taller). The straightforward narrative is given enormous energy by the inventive format and realistic watercolor illustrations—their soft edges and muted hues suit the mist-shrouded giants. Chin adeptly captures the singular and spectacular nature of redwoods in this smartly layered book. Ages 4–8.