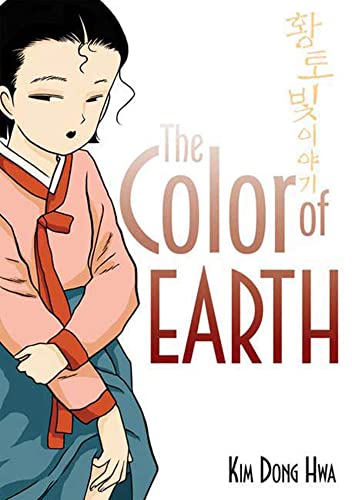 The Color of Earth

This manhwaâ€”first in a trilogyâ€”chronicling the lives of a single mother and her daughter in rural Korea is a moving and evocative look at love as seen through the eyes of one feeling it for the first time and another who longs to savor it once more. The story follows daughter Ehwa from age seven up as she discovers the physical differences between boys and girls, grows into young womanhood and undergoes her initial confusing experiences with attraction and romance. Ehwa's interest is piqued by a young Buddhist monk, a lad whose interest is mutual but doomed to futility thanks to his faith's strict code of celibacy. Meanwhile, Ehwa's mother, who was widowed at an early age, finds her loneliness soothed by the attentions of an artistic traveling salesman known only as â€œPicture Man.â€ Their relationship later helps Ehwa understand much about the joys of making a romantic connection. This book has no conflict other than that common to youthful competition over boys, but it is a work of great humanity that sucks the reader in. Kim's artwork is stunning, and seldom has a male writer captured the attitudes, emotions and behavior of female characters so believably.