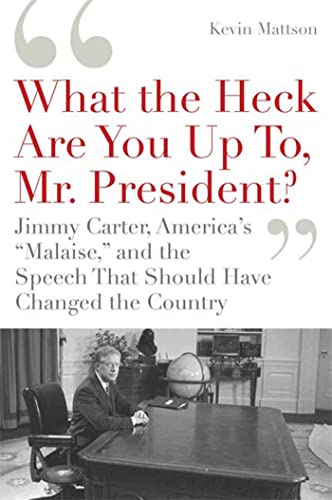 “What the Heck Are You Up To, Mr. President?” Jimmy Carter, America’s “Malaise” and the Speech That Should Have Changed the Country

The 1979 “national malaise” speech that defined Jimmy Carter’s presidency—though he never used the word “malaise”—gets its due in this contrarian homage. Ohio University historian Mattson ( ) considers the speech—which expressed Carter’s own crisis of confidence, bemoaned Americans’ loss of faith in government and deplored the country’s selfishness and consumerism—to be a thoughtful response to the problems of the day that initially won public acclaim, before political opponents caricatured it as a gloomy scolding. Following the speech from its bizarre provenance in an apocalyptic memo by pollster Pat Cadell through its honing during a messianic “domestic summit,” the author sets his colorful study against a recap of the gasoline shortages, inflation and Me Decade angst that provoked it. He interprets it as a tantalizing road not taken: with its prescient focus on energy, limits and sacrifice, its “humility and honesty,” it was, the author says, the antithesis of the Reagan era’s sunny optimism. Mattson makes Carter’s maligned speech a touchstone for a rich retrospective and backhanded appreciation of the soul-searching ’70s.