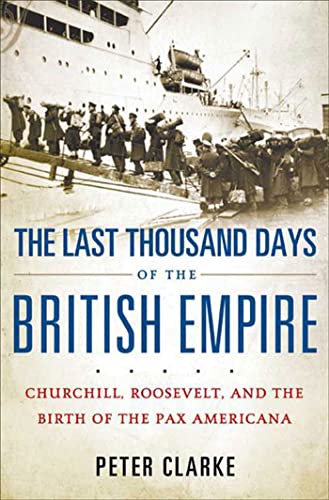 The Last Thousand Days of the British Empire: Churchill, Roosevelt, and the Birth of the Pax Americana

Britain's collapse as a great power is chronicled in this lively diplomatic history covering the end of WWII through the British withdrawal from India and Palestine in the late 1940s. Historian Clarke ( ) tells a fundamentally prosaic story. Britain, its finances, military power and morale exhausted by the war, found itself marginalized by the superpowers and dependent on American aid; when imperial commitments in India and Greece grew unaffordable, according to Clarke, Britain ditched them rather abruptly, along with its central role in world affairs. Drawing on participants' diaries, Clarke offers a fine-grained, well-paced narrative of British statesmen playing their weak hand in one negotiation after another, begging for economic concessions from the hard-nosed Americans, strategic concessions from an indifferent Stalin and political concessions from impatient subjects. At the story's center is Winston Churchill, embodiment of Britain's faltering imperial pretensions. In Clarke's caustic portrait, Churchill is vain, pompous and infantile (showily urinating on Germany's Siegfried line, for example), forever disguising a humiliating decline with grand rhetoric. The opposite of great man historiography, Clarke's sympathetic but sardonic account shows anxious leaders struggling to catch up with a world that has passed them by. 16 pages of b&w photos; maps.