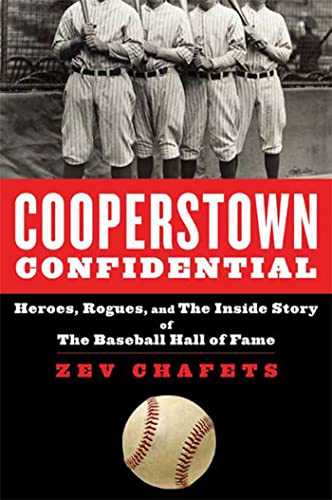 Cooperstown Confidential: Heroes, Rogues and the Inside Story of the Baseball Hall of Fame

Cooperstown is a sleepy New York village with a population barely eclipsing 2,000, in a location where if you arrive by mistake, “you've been lost for forty-five minutes.” But Chafets explains why Cooperstown and the National Baseball Hall of Fame and Museum is a must-see destination for hundreds of thousands of baseball fans each year, diving into more than just the 200-plus players that have received baseball immortality by induction into the Hall of Fame. Chafets ( ) briefly explores the history of how the Hall of Fame came to pass, but the real good stuff comes as he dives into the politics of the museum and how race has played a role in who has received election and who has received the shaft. He looks at the “monks” who oversee the hallowed halls, the writers who act as gatekeepers to the Hall of Fame, and explains how election can make what was once a player's worthless memorabilia into a gold mine. Much of Chafets's subject matter is sure to strike a chord with baseball fans, and many will surely disagree with his stance on steroids as it relates to a player's induction. The relationships he develops with the Hall staff, combined with his accessible style, gives the reader a glimpse beyond what one might see at the exhibits.