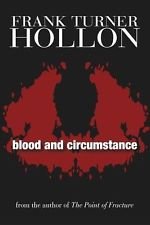 Reading like an offbeat criminal justice version of the talking-head film , attorney Hollon's latest takes an intriguing look at the nature of mental capacity. The bulk of the novel consists of psychiatric sessions conducted in prison by Dr. Ellis Andrews with inmate Joel Stabler, accused of the murder of his brother, Danny. Joel's uncanny intelligence enables him to turn the tables on his interrogator, manipulating the doctor into empathizing with the accused, who claims that he took his sibling's life to spare Danny from the ravages of mental illness that devastated their father. The reliability of Joel's memories is called into question, leading to a satisfyingly ambiguous ending. The author's gift for understated dialogue makes the conversations between doctor and patient particularly compelling.