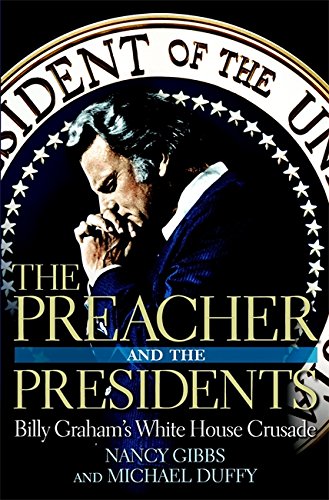 The Preacher and the Presidents: Billy Graham's White House Crusade

Over the course of seven decades, the Rev. Billy Graham befriended every occupant of the White House, from Harry Truman to George W. Bush. This expansive text draws on Graham's autobiographies, other biographies, presidential diaries and memoirs, and historical texts and documents to examine each of those relationships. Less about Graham himself—or the presidents he knew and advised—than about their interactions and alliances, the text is most likely to appeal to readers with previous knowledge of the subjects. Gibbs, a writer for , and Duffy, an assistant managing editor at the magazine, maintain a balance between the political and the personal, featuring Graham's role counseling Eisenhower on civil rights, relating an anecdote about Graham and Johnson swimming in the White House pool and discussing Graham's influence on Hillary Clinton when her husband's infidelities were made public. They foreground Graham's difficulty in negotiating the separation between church and state, particularly during his friend Richard Nixon's 1960 campaign and Nixon's presidency; that friendship forms the centerpiece of this thoughtful book. Gibbs and Duffy marvelously dramatize Graham and Nixon's fraught, intimate relationship, so that some of the other presidents, particularly those who followed Nixon, seem undersketched by comparison.