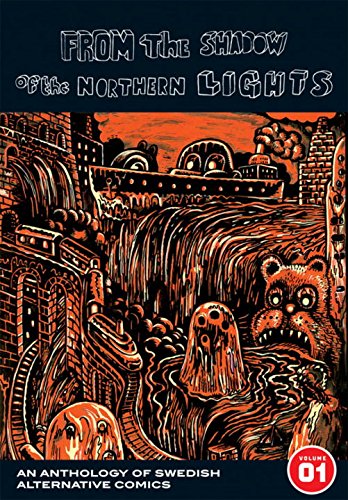 From the Shadow of the Northern Lights: An Anthology of Swedish Alternative Comics

Galago, the publisher of this b&w anthology, started as a Swedish political satire magazine three decades ago. Now, it showcases alternative comics inspired by Robert Crumb and Ingmar Bergman, with an emphasis on dark humor. Other adjectives that accurately describe the work are “melancholy” and “anguished.” This book was originally assembled as the catalogue for an art show focusing on 13 of these cartoonists, and similar others have been added. Thus, this collection brings unknown cartoonists to a wider audience. Contributors include David Liljemark, Marcus Ivarsson, Mats Jonsson, Knut Larsson, Kolbeinn Karlsson, Liv Strömquist and Loka Kanarp. Artistically, it's a wide-ranging sampler, with simple work reminiscent of Jeffrey Brown, nightmarish imagery, and thick, chunky, cartoony influences with bold toning. Thematically, it mostly tackles the usual alternative topics of quotidian incidents, sometimes using animal characters to make them more striking. If you're interested in finding new alternative comic work before it's widely known, this is perfect, guaranteed to be fresh just through unfamiliarity.