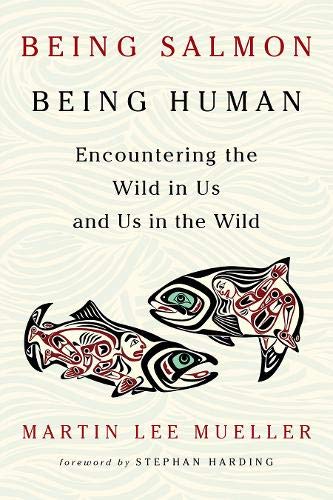 Being Salmon, Being Human: Encountering the Wild in Us and Us in the Wild

Mueller, a naturalist, philosopher, and storyteller from Oslo, links his fate to wild salmon in a remarkable work that doubles as poetic treatise and a broad environmental critique. He migrates across many waters—including ethnography, genetics, and linguistics—but throughout his focus remains the coho, sockeye, and other river-spawning salmon species with which humans share an intricately woven history. Anthropocentrism comes in for harsh criticism in this account. So does the Norwegian fish-farming industry, which boasts of providing 12 million salmon dinners a day; AquaBounty Technologies, a Waltham, Mass., biotech company that in 2010 applied to the FDA to market a genetically modified supersalmon; and René Descartes, the early modern philosopher whose separation of mind from body (and thus of the human from nature), Mueller argues, is responsible for the “suicidal” course on which humans have put the planet. Here, Spinoza and philosopher David Abram (Mueller’s mentor) offer alternate “narratives” for survival, an ecologist investigates how the fungal networks in tree roots help forest communities survive, a geomorphologist studies modern humans’ dysfunctional relationship with dirt, a microbiologist espouses Gaia theory, and an ethnographer asks Quinault elders for their “side of the story” regarding Capt. Robert Gray’s 1787 “discovery” of the Columbia River. This is a powerful book about what it means to be human in the “more-than-human” world. (Nov.)
close
Details