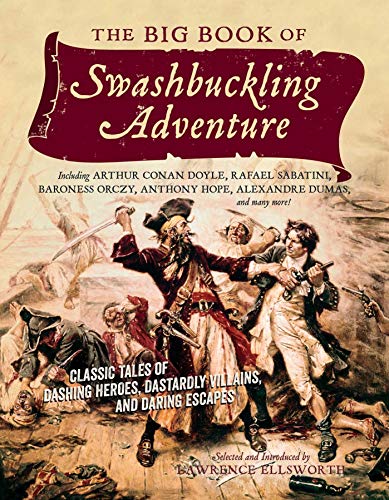 A buckler was a round shield about a foot in diameter, held in one fist and popular for five centuries until about 1600. “To swash” was to clash a sword against the buckler to signal challenge or defiance. And indeed, heroes boast, villains boast more, and the bad guys get their comeuppances in this rousing anthology of sword fights, disguises, betrayals, escapes, and bravado from late-19th- and early-20th-century writers.

The classic swashbuckler, Ellsworth explains in his introduction, was usually rooted in history and featured an independent and agile rogue, armed with a light rapier for rapid fencing. Robert Louis Stevenson added pirates to the mix, and, in 1919, Arthur Johnston McCulley gave us the Zorro mask. All the protagonists were smart, cheeky, and resourceful. This anthology includes Zorro and Robin Hood, and tales of derring-do by such well-known authors as Alexandre Dumas père and Arthur Conan Doyle, but the real delight is the rediscovery of largely forgotten bestsellers from days of yore, such as Rafael Sabatini (Captain Blood), Baroness Orczy (The Scarlet Pimpernel), Jeffrey Farnol, H. Bedford-Jones, Harold Lamb, and Marion Polk Angellotti. Their combined historical research is impressive. How well do they wear? At times the anthology is like a primer for Talk Like a Pirate Day. Here’s a passage from “Pirates’ Gold,” an intricately plotted novella by Bedford-Jones: “ ‘Pirates, is it?’ he maundered, coming toward us. ‘Sink me, but I ha’ been cabin boy to Avery, and this is a poor pack o’ thieves and woolsack rogues—there, ye lousy dogs! Wake up and give tongue! An I had my way ye’d walk the plank come sunup.’ ” Arrr!

Once the reader settles into the dated style, however, the tales are as quick and cutting as a rapier blade. These are stories of pride, loyalty, risk, and courage, well plotted and cleverly inventive. The heroes are sometimes intriguingly tormented, and the lesson is that ill fortune can always turn. The roll of the dice and twists of fate in Stanley J. Weyman’s “Crillon’s Stake” are fantastic fun. Women are present mostly to be desired and rescued, but many survive on their wits. Villains are bloodily dispatched, not understood. Aye, ’twas a simpler time! Ellsworth offers the reader an excellent and entertaining survey of the genre’s roots, a brilliant selection of dash, pluck, skill, yearning, and fortune.