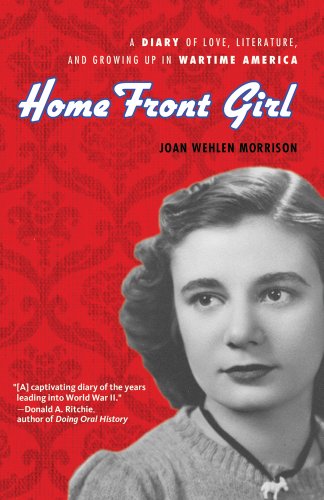 Home Front Girl: A Diary of Love, Literature, and Growing Up in Wartime America

This contemplative and often entertaining collection of journal entries, poems, clippings, and sketches by the late Morrison, edited by her daughter, spans the tumultuous years between 1937 and 1943, which took Morrison from age 14 to 20, and took the world from the Great Depression into WWII. Morrison’s parents were Swedish immigrants who settled comfortably in Chicago, and Morrison details her school day concerns and studies, exploring the city, her crushes on boys, attending the University of Chicago, and her thoughts on religion, books, films, and more. She also comments on the increasingly dramatic news of the day, from the Hindenburg crash (“The Herald Examiner said 100 people were killed, but as it’s a Hearst paper, 50 is a safer guess”) to Pearl Harbor and the U.S. entry into the war (“Well, Baby, it’s come, what we always knew would come”). Her sensitivity to and exuberance about events large and small is contagious, though her poetic tendencies are tempered by her doubts, intellect, sarcasm, and savvy. Witnessing Morrison mature as a woman and a writer is invigorating and memorable. Ages 12–up. (Nov.)■
close
Details