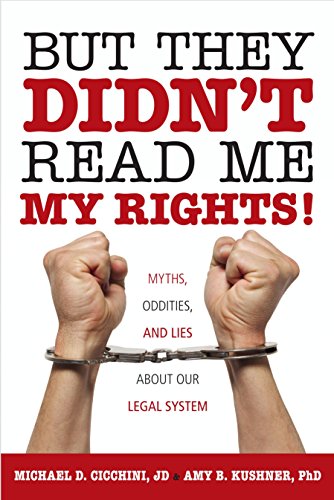 But They Didn't Read Me My Rights! Myths, Oddities, and Lies About Our Legal System

The law is never black and white, as Cicchini and Kushner prove in this entertaining look at common assumptions and misconceptions about the American justice system. Presented as a series of questions and answers, the book begins with attention-grabbing legal oddities (e.g., it's possible to be convicted of drunk driving without actually driving a car) and progresses through the particulars of contract law, taxation, and civil suits. Cicchini and Kushner, a criminal defense attorney and college English lecturer respectively, stress that the myriad state and federal laws are too vast to memorize; they are also almost always flexible, being applied to specific cases through legal reasoning. For example, it's possible to be convicted of multiple counts of the same crime, despite the constitutional protection against double jeopardy, provided there are multiple victims. While some of the questions border on ridiculous (“Can the police tell when you're lying?” “Are public defenders 'real lawyers'?”), the majority will intrigue the average reader accustomed to the television version of law and order, which emphasizes drama rather than legal precedent.