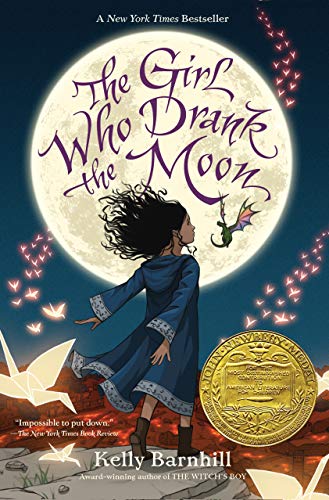 The Girl Who Drank the Moon

Xan, a kindhearted witch, lives in the woods with an erudite swamp monster, Glerk, and a lovable “Perfectly Tiny Dragon,” Fyrian. Every year she finds a new home for a baby the sorrowful people of the Protectorate leave in the woods on the Day of Sacrifice. One year, she accidentally “enmagicks” a baby with moonlight, so the three decide to raise her as their own, their Luna. But Luna’s magic is strong, and before her 13th birthday, events unfold that will change everything she has known. Barnhill (The Witch’s Boy) crafts another captivating fantasy, this time in the vein of Into the Woods. Via intricately woven chapters that follow Luna, her unusual family, the devious Grand Elder of the Protectorate, his honorable nephew and niece, the mysterious Sister Ignatia, and a sympathetic “madwoman” in a tower, Barnhill delivers an escalating plot filled with foreshadowing, well-developed characters, and a fully realized setting, all highlighting her lyrical storytelling. As the characters search for family, protect secrets, and seek truth, they realize that anything can happen in the woods—when magic is involved. Ages 10–up. Agent: Steven Malk, Writers House. (Aug.)
close
Details