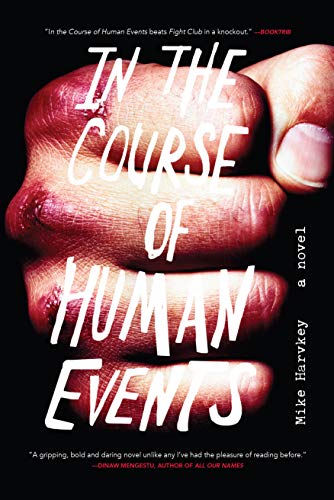 In the Course of Human Events

In his debut novel, former PW deputy reviews editor Harvkey heats incendiary current events to their boiling point, drawing on his own upbringing in meth-ridden northwest Missouri and his black belt in Kyokushin, a form of karate, to examine a young man’s life in Winter’s Bone territory. Twenty-year-old Clyde Twitty—who landed a factory job while still in high school, only to lose it a few years later—has a lot on his mind: his gig driving cars to auction brings in only $40 per week; his mother depends on Clyde’s support to pay her mortgage and maintain her hairstyling business, and he helps his handicapped uncle as well; and his best friend is in Nashville, a world away from Clyde’s hometown of Strasburg, Mo. But Clyde suddenly discovers a sense of purpose when he meets Jay Smalls, a self-styled karate warrior, whose stomach is as hard as his ultra-right-wing political beliefs. Smalls and his family—including his daughter, underage seductress Tina—make short work of indoctrinating Clyde. Soon his “training” pulls him into the so-called patriot movement: he attends Aryan conventions, reads literature like The Turner Diaries, and declares himself, in far-right legal parlance, a “non-resident, non-foreigner stranger to the current state of the forum.” Harvkey skillfully shows how Clyde’s conscience gives way to his desire for meaningful work and connections; as they say, idle hands are the devil’s workshop. As a conspiracy with nation-rocking potential takes shape, Harvkey pushes this eerie, engrossing satire to its bloody conclusion. It’s a provocative, unflinching look at the hate that poverty has fomented in places like Strasburg—“the town the American Dream forgot.” Agent: Bill Clegg, WME Entertainment. (Apr.)
close
Details