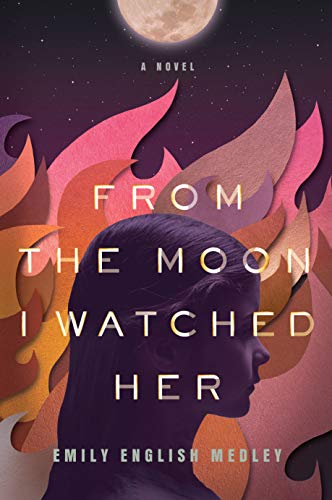 From the Moon I Watched Her

Medley’s intense coming-of-age debut details the damage mental illness and extreme religious beliefs inflict on one family. Narrator Stephanie Walters is five years old in 1977 Pasadena, Tex., where her maternal grandfather, Daddy Black, preaches at the Bayside Church of Christ and believes abortion should be punished by death. Stephanie is in awe of Black, as well as her “extra good Christian” father, banker and deacon Paul; her pretty mother, Lily; and her seven-year-old sister, Katherine, but her home life is upended after Lily pulls a gun on the family for opening a Christmas package sent to Lily by her uncle. Lily is admitted to a hospital for psychiatric care, and when she comes home after a brief spell, it’s clear that, despite Paul’s dismissiveness, there’s some truth behind her conflicting stories about miscarrying a baby before they were married, which, if revealed, would undermine the family’s dogma. Several years later, after Lily learns Paul’s having an affair, Stephanie and Katherine are at risk of being “disfellowshipped” by their grandfather. Medley’s shrewd view into small-town culture and religious hypocrisy brilliantly conveys Stephanie’s conflicting emotions, loyalties, and behaviors as she becomes a teenager. This poignant story of loss and self-discovery shines by showing the human desires for truth, community, and love under a church’s oppressive control. (Jan.)
close
Details