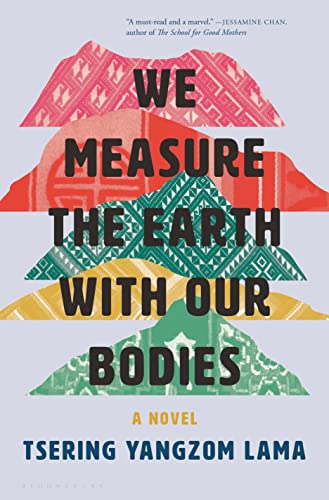 We Measure the Earth with Our Bodies

Lama debuts with the heartfelt and magical saga of a Tibetan family’s love, sacrifice, and heritage. Starting in 1960, Lama interweaves the lives of four characters: Lhamo and her younger sister Tenkyi, whose parents don’t survive the rigors of the Himalayas during their flight from Tibet to Nepal, where they resettle in a village for refugees; Lhamo’s daughter Dolma; and Samphel, Lhamo’s childhood love, whom she meets in Nepal. Lama also explores the influence of a ku—an ancient statue that Samphel’s uncle brings into Lhamo’s village—on each of their lives. Lhamo, despite heartache, encourages her younger sister to leave their village to study in India and improve her future prospects. Decades later, in another act of selflessness, Lhamo suggests her daughter join Tenkyi, now in Toronto, to complete her studies and have a better life. When Dolma discovers the ku of Lhamo’s childhood in the possession of a private collector in Canada, she sets in motion a series of events that illustrate the power of the ancient relic and its hold on Lhamo’s family. Lama imbues this mesmerizing tale—informed by her own family fleeing Tibet for Nepal in the early 1960s— with a rich sense of history, mysticism, and ritual. This brings great revelations and significance to a family’s courage and acts of cultural preservation. (May)

Correction: A previous version of this review incorrectly stated two of the book's characters were killed while fleeing Tibet for Nepal.