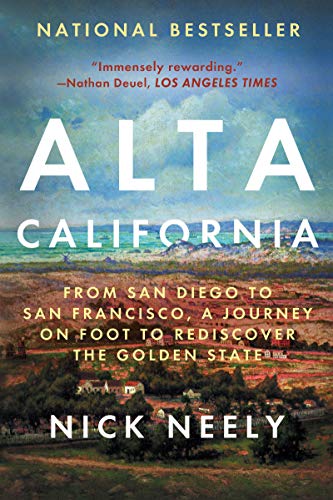 Alta California: From San Diego to San Francisco, a Journey on Foot to Rediscover the Golden State

In this detailed travel memoir, environmental writer Neely (Coast Range) relates his 650-mile walk in the footsteps of an 18th-century Spanish exploration along the coast of California. In 1769, the Portola expedition went overland from what became the towns of San Diego to San Francisco, setting the stage for the settlements, forts, and Catholic missions that would become California. Neely relies heavily on expedition journals along his walk, especially one by a friar named Juan Crespi, and reimagines the near untouched splendor of the West Coast. Even walking through subdivisions and cities and along highways, he finds poetic images in the most unlikely places (“The holy red palms of an In-N-Out cup. A water bottle of sunflower seed husks like a ravaged birdfeeder from someone’s lips”) and encounters many of those who rely on the land—surfers, farm laborers, winemakers. Along the way, he explores the roots of such famous Californians as José Francisco Ortega (founder of the Ortega chili company), writer John Steinbeck, civil engineer William Mulholland, and John Paul Getty. Neely ends in the Bay Area under a redwood tree where the Portola expedition camped, with the hope that the tree “might live another thousand years.” Neely’s naturalist, erudite work will appeal to readers of Thoreau’s Walden and Edward Abbey's Desert Solitaire. (Nov.)