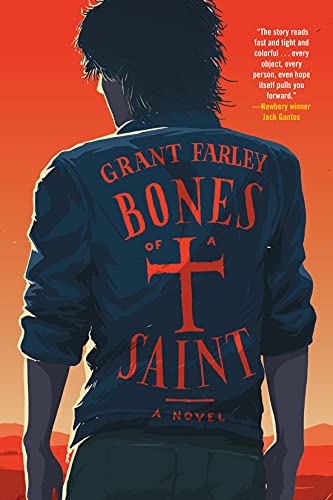 Bones of a Saint

Set in Arcangel Valley, Calif., in 1978, RJ Armante, 15, who has freckled skin and auburn hair, lives with his mother and five half siblings at the Canterbury Trailer Park. RJ and his best friend Manny, who is Mexican, spend the summer avoiding the local gang, the Blackjacks, while accommodating RJ’s babysitting schedule. When RJ’s nemesis Roxanne, who is white and “Mission Indian,” lures a group of older boys to an abandoned farmhouse—and former Blackjack hangout—she locks RJ in the root cellar, not realizing that someone has already moved into the house. Angry with the owner for buying their best hideout, and wanting to leave him a “warning,” the Blackjacks learn RJ was released from the cellar by the new owner and force him to deface the home’s walls with pentagrams under the threat of violence. But RJ gets caught and meets the new owner, elderly John Leguin. RJ and Leguin, a former priest, develop a friendship, but the threat of violence from the Blackjacks is never far away. Conjuring the era through musical references as well as mentions of Son of Sam and Jim Jones, debut novelist Farley evokes the psychedelic ’70s; RJ’s candid voice will engage contemporary readers in this atmospheric coming-of-age tale that effectively knits together storytelling, religion, morality, redemption, and heredity. Ages 14–up. [em]Agent: Stephen Barr, Writers House. (Mar.) [/em]
close
Details