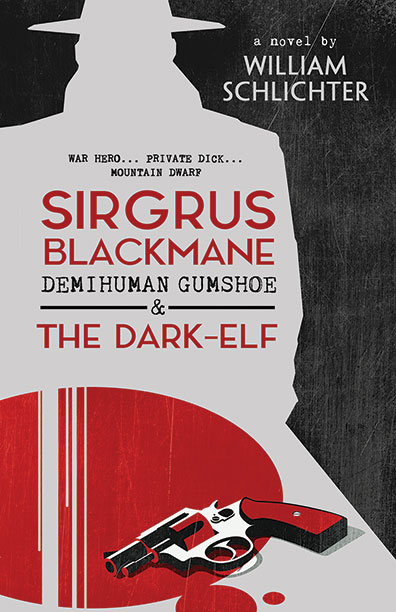 This surprising, dexterous mashup of high fantasy and hardboiled thriller from Schlichter (SKA: Serial Killers Anonymous) begins with G-man and mage Agent Edgeangel summoning the eponymous narrator, a dwarf PI, to a bootlegger’s warehouse where his partner, Craig Mason, has just been found murdered. Before Sirgrus and Craig started their detective agency, they were buddies in the Great War, fighting orcs and vampires side by side, so Sirgrus feels obliged to avenge the dead human. To do so he must navigate a city uneasily divided between humans and other species—fairies, for example, have just won the right to vote. As his investigation leads him to the Dark-Elf, a popular speakeasy where all kinds of perversions are offered by dragonborn mobster Medrash, Sirgrus must balance the demands of rival gang bosses, Agent Edgeanagel’s nagging, and the realization that Mason was really a rotten jerk. He also struggles with recurring dreams from his time in the War—experiences that may be more connected to the present day mystery than they seem. Tolkien would be aghast at what Schlichter does with mythic lore, but the detailed worldbuilding and genuine feeling make everything work against the odds. Readers are in for some fun. [em](May) [/em]

Feed Them Silence
Feed Them Silence
Lee Mandelo
This impressive novella from Mandelo (Summer Sons) probes the bounds of human empathy in the face of ecological crisis. Sean, a middle-aged researcher in the year 2031, embarks Continue reading »

Dogs of War
Dogs of War
Adrian Tchaikovsky
Arthur C. Clarke Award winner Tchaikovsky (Children of Time) takes readers inside the mind of a weaponized bioengineered animal in this imaginative triumph, the first in a Continue reading »

Knot of Shadows
Knot of Shadows
Lois McMaster Bujold
Temple sorcerer Penric and demon Desdemona return in this page-turner fantasy mystery from Bujold, the 11th in the series (after The Assassins of Thasalon) and possibly the best Continue reading »