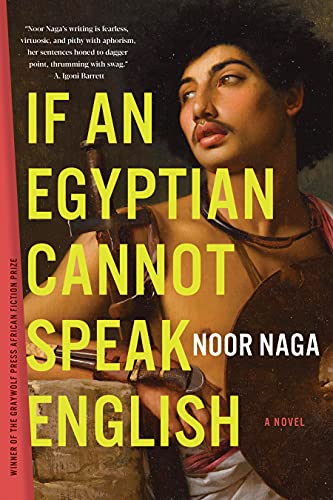 If an Egyptian Cannot Speak English

Naga (Washes, Prays) delivers a chaotic experimental romance, narrated by a wealthy Egyptian American woman and a bohemian Egyptian man who meet and fall in love at a café in Cairo soon after the Arab Spring. The unnamed man moves into a fancy apartment with the woman, whose name is eventually revealed as Noor, and their romance quickly sours. Much of the story consists of alternating monologues that address the characters’ respective feelings of alienation. Noor, who keeps her head shaved, feels uncomfortable as an outsider in what is purportedly her homeland, and the man feels insecure because of his humble origins (at one point, he explodes upon discovering a back staircase in their flat that once led to servants’ quarters). Naga impresses with her snappy prose (“There is all the evidence of a past tended by a woman’s hands—he’s at least as spoiled as he is damaged,” Noor observes) and has a gift for exploring varied perspectives. The voice of the male protagonist is spiked with testosterone and self-pity, as when he harangues his lover (“I almost jumped off your beloved balcony yesterday. Don’t you know you’re the only good thing I have?”), but as the passage shifts to an internal monologue, Naga poignantly reveals his humanity. This smart story is distinguished by its surprising empathy. (Apr.)

This review has been updated to reflect changes made to the book after the review was originally published.