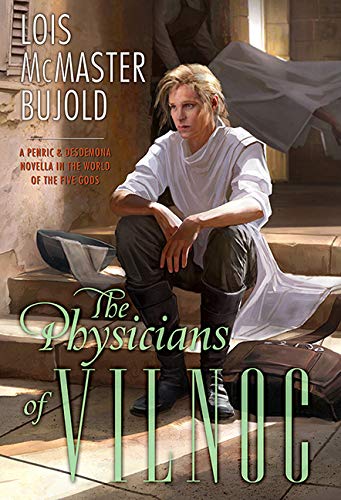 The timely, well-told ninth fantasy in Bujold’s Penric and Desdemona series (after The Orphans of Raspay) returns to the World of the Five Gods where temple sorcerer Penric and chaos demon Desdemona, who cohabitate Penric’s body, deal with a plague heretofore unknown in the Duchy of Orbas. The disease first sweeps through the fort where Penric’s brother-in-law, General Adelis Arisaydia, is in charge. When Penric arrives to provide his magical assistance, the fort’s senior physician has just fallen ill, leaving Penric to work with apprentice Rede. Penric and Desdemona take on exhausting rounds of ministering to the soldiers at the fort, the residents of the adjacent village of Tyno, and, eventually, the citizens of Vilnoc, among them Penric’s wife and newborn daughter. As the illness spreads, Penric, Desdemona, Rede, and others desperately work to understand its origins—but it will take a bit of divine intervention to solve that mystery. In past outings, Penric’s and Desdemona’s wit have helped them out of many scrapes, but here they must rely on dogged, wearying persistence. Fantasy works seldom dwell on something as mundane and intangible as sickness, making this a rare tale. As always, it is the humanness of Penric and his demon that makes these characters shine. Series fans will be pleased. [em](July) [/em]
close
Details