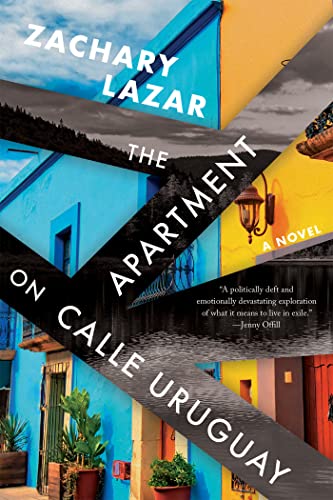 The Apartment on Calle Uruguay

The contemplative latest from Lazar (Vengeance) follows a grief- and guilt-stricken artist through a series of changes in the early days of the Trump administration. After Christopher Bell’s girlfriend, Malika, dies in a car accident, he steps away from painting, buys a house on Long Island, maintains his sobriety, and begins teaching at a local college. He also falls for Ana Ramirez, a journalist who escaped the violence in her home country of Venezuela, and their relationship brings back memories of Malika, whom he imagines to be judging him. Christopher, who was born in Israel, shares with Ana a sense of displacement. He keeps in contact with Malika’s incarcerated brother, Jesse, and tells him about Ana, but when Ana moves from Long Island to Mexico, where her family resettled after fleeing Venezuela, the couple’s romance sputters. Christopher’s narrative tics, such as an aversion to certain specific details like the names of song titles (“the song about being halfway there, living on a prayer”), can feel cloying, but the account of his and Ana’s struggles to maintain their relationship through adversity and upheaval are fascinating. In the end, Lazar perfectly orchestrates a symphony of frustration, empathy, fear, and hope into a thoughtful and timely tale. (Apr.)
close
Details