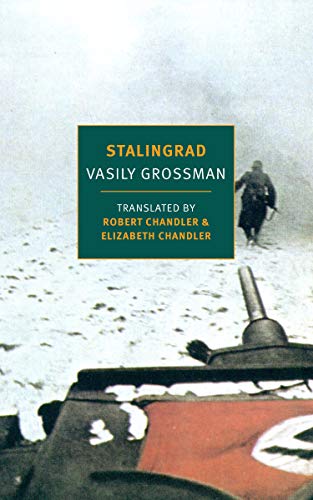 Grossman’s epic, sprawling novel from 1952 is a masterpiece of intertwined plots that cascade together in a long sequence of militaristic horror. Grossman (1905–1964), best known for this book’s sequel, Life and Fate, was on the scene as a Soviet war reporter during WWII’s Nazi siege of Stalingrad, and the novel teems with his firsthand observations. The action is told from dozens of perspectives, ranging from humble workers to Hitler himself. Most of the characters have some relationship to Stalingrad’s Shaposhnikov family. After an opening dinner party, the Shaposhnikovs are separated by a war that has drawn ever nearer to their city. Alexandra, the family matriarch, is forced into exile with her oldest daughter, Ludmila. Ludmila’s husband, Viktor Shtrum, an important scientist, is worried that his Jewish mother has been a victim of the Holocaust. Alexandra’s second daughter, Marusya, and her daughter, Vera, display heroism in their wartime work in an orphanage and a hospital. The beautiful Zhenya, Alexandra’s youngest daughter, has left Nikolay Krymov, a communist thinker, and is being courted by Pyotr Novikov, a gifted military strategist. Two of the family’s grandchildren, Tolya and Seryozha, are in military units defending the city. When the bombing of Stalingrad begins, Grossman cuts between viewpoints, rewinding time over and over again. A spectacular afterword details the extent of censorship the text suffered under Stalin. As a stand-alone novel, this is both gripping and enlightening, a tour de force. When considered as a whole with Life and Fate, this diptych is one of the landmark accomplishments of 20th-century literature. (June)
close
Details