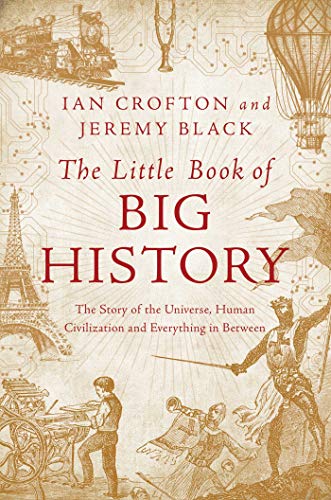 The Little Book of Big History: The Story of the Universe, Human Civilization, and Everything in Between

In this remarkable book, Crofton (Walking the Border), former editor-in-chief of the Guinness Encyclopedia, and Black (The Holocaust: History and Memory), professor of history at Exeter University, adopt a macrohistorical perspective as they view humankind in the context of the history of the universe. Beginning with the singularity that exploded into the big bang, they trace the birth of stars, planets, bacteria, dinosaurs, and apes before arriving at humans. Along the way, the authors investigate such topics as what makes us human and how we differ from the dead ends in our family tree. In quick succession the authors show how humans covered the globe, farmed, domesticated animals, and conquered other humans. They then turn to a more difficult issue: moral codes. While a survey of philosophy and religion concludes that moderation, tolerance, and charity are considered fundamental, many subsequent chapters demonstrate how mechanical inventions facilitated slavery or serfdom. The final section warns that intolerance and greed foment continued conflicts, global warming, economic imbalance, and other factors that may lead to the end of human civilization. As the universe expands forever into the void, Crofton and Black leave readers with “a humbling insight into how contingent and fleeting our existence is.” (July)
close
Details