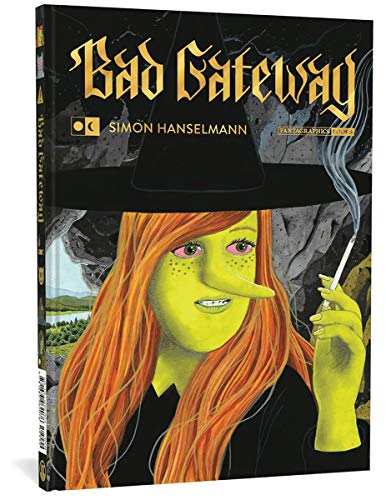 Hanselmann’s fifth Megg, Mogg & Owl collection, set after the events of the Eisner-winning Megg & Mogg in Amsterdam, finds its depressed, drug-addicted ensemble cast tumbling out of their arrested development and into a free fall of self-reflection. Whereas most previous volumes have existed in a realm outside of time and continuity, Owl’s abrupt departure from the trio’s shared home starts a ticking clock for red-headed witch Megg and her black cat partner Mogg, who have been tricking Owl (an owl) into paying their rent. As their desperation to escape their problems, and one another, skyrockets, so too does their drug and alcohol abuse. Megg’s armor begins to crack as she uncovers the roots of her trauma in long-avoided childhood memories. In a surprising turn, Hanselmann’s trademark raunchy dark humor is only rarely on display in this collection, making room instead for a stark, unblinking gaze into the heart of self-harm, mental illness, and addiction—a reminder that, despite their goofy, cartoonish aesthetic, each character is a monster in their own horror story. The grotesque stoner art style and sickly coloring remains consistent, with little evolution over the course of the series. But Hanselmann’s storytelling sensibilities have matured here, with meditations on the makeup of a “bad person” that are tense, uncomfortable, and, appropriately enough, sobering. [em](July) [/em]
close
Details

Slash Them All
Slash Them All
Antoine Maillard
A remorseless killer stalks a beach town in Maillard’s spectacular debut. The story opens in dramatic fashion when a man with obscured eyes bludgeons two girls to death with a Continue reading »