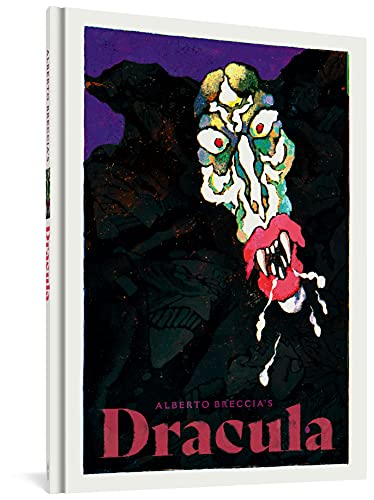 The late Breccia (Perramus) brings a stunning, nightmarish, and politically charged vision to Dracula’s final days in this wordless volume, which tells five disconnected tales as the vampire wanders through a city, encountering old lovers, would-be victims, and Edgar Allan Poe. Breccia (1919-1993), whose major surrealist works satirized the Argentinian dictatorship, first published these full-color painterly comics stories in Spain’s Comix Internacional in 1984. Their characters appear twisted and abstracted, an outward expression of moral decay. Together they reveal a desperately lonely figure who, despite the grandiosity of his mythology, is increasingly feckless in the face of a crumbling society. Some pieces run almost like jokes. For instance, Dracula roams a carnival, stalks a beautiful woman, and tries to victimize her, but he’s thwarted by a man in a Superman outfit (sans logo); when the hero follows the woman, lured by the promise of romance, he discovers that she herself is a vampire. The fourth installment, though, ends not with a punchline, but with a descent into nightmare, as Dracula navigates a hellscape overrun by secret police, cannibalism, and mass starvation. His immortal power useless, Dracula becomes a scared witness, and the episode ends with him clutching a cross and praying in a church—while unsubtle, the commentary plays against the familiar conventions of the character. Breccia’s gothic visions skewer the power of myth and make a salient statement about a society that would support fascist rule. (July)
close
Details