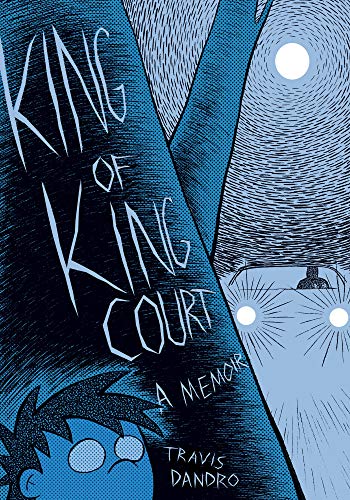 Punctuated with close-ups of the details that fill a small boy’s life, Dandro’s debut memoir is an extended poetic gaze on intergenerational helplessness and the violence it begets. Dandro draws both his six-year-old and teenage self with empty circles for eyes, as if he is a vessel for receiving his surroundings—including the inconsistent presence of his father, Dave, a tough guy with dark sunglasses, a muscle car, and a drug problem. It doesn’t help that his mother, despite marrying Dandro's stepfather, alternates between fleeing Dave and rekindling their affair. This is the ’80s, and when Travis hears a story about the kidnapping of Adam Walsh, his anxieties bloom into nightmares. Dandro expertly balances a child’s-eye view with authorial empathy; Dave is drawn both larger-than-life and human and hurting; and Dandro's mother as loving, even as she fails her son. Though over 400 pages, the story flies by in often wordless, poignant sequences. At the end, Dandro watches a fish tank scuba diver repeatedly surge toward the surface, only to be pulled down by the weight of a sunken chest that undoubtedly contains both treasure and tragedy. This gloriously scribbled story doesn’t rest on easy morals, or even attempt to forgive the past—Dandro’s triumph is drawing the reader through both the pain and beauty of his upbringing, and then moving forward. [em](Aug.) [/em]

Correction: An earlier version of this reviews incorrectly stated the author's mother was married to his father.