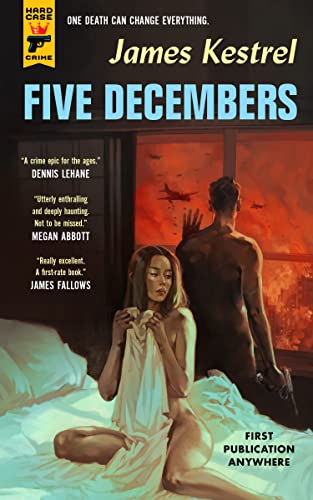 In early December 1941, police detective Joe McGrady, the hero of this enthralling crime novel from the pseudonymous Kestrel, investigates the murder of Henry Kimmel Willard, a 21-year-old student at the University of Hawaii, whose tortured and disemboweled body was found hanging inside a shed in the mountains outside Honolulu. Also in the shed was the body of an unknown young Japanese woman, who was similarly butchered. Henry, who was destined for a promising career in Navy Intelligence, was studying Japanese, so his connection with the other victim may have been professional, as suggested to McGrady by his real-life uncle, Admiral Kimmel, who commands the U.S. Pacific Fleet moored at Pearl Harbor. A possibly related murder takes McGrady first to Wake Island and then to Hong Kong on the trail of an elusive assassin known as John Smith. When the Japanese capture Hong Kong, they take McGrady prisoner, but his quest for the killer is only beginning. Heartfelt, enduring images of war and the pain and damage it reaps are sprinkled throughout Kestrel’s vivid, richly detailed narrative, which carries McGrady to the end of WWII. This tale of love, courage, hardship, and devotion is unforgettable. Agent: Alice Martell, Martell Agency. (Oct.)
close
Details