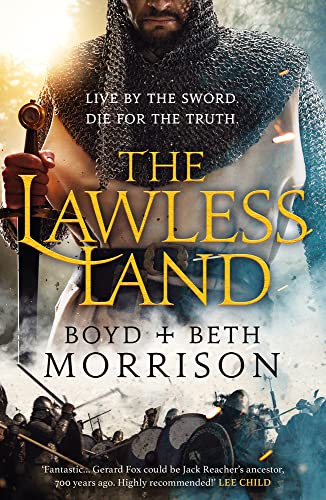 In the summer of 1351, English knight Gerard Fox, the hero of this exceptional series launch from siblings Boyd (Piranha with Clive Cussler) and Beth Morrison, is riding his horse in Kent when he’s overtaken by a carriage hurtling down the road driven by a young woman fleeing murderous attackers. After rescuing the woman, Lady Isabel of Kentworth, Fox learns she’s fleeing a hated fiancé. The two join forces, only to learn secrets about each other in a series of well-timed twists. The authors make splendid use of such medieval-plot standbys as a castle with secret tunnels, plague-riddled vagabonds, a grand tournament, a priceless manuscript, and duplicitous churchmen as the action ranges from Canterbury to Paris and elsewhere in France and finally Italy. But the novel’s real strength is its antagonists: Isabel’s ruthless fiancé, the Earl of Tonbridge; the power-hungry Cardinal Dominic Molyneux; and, best of all, the cardinal’s sociopathic son, Basquin. Fox and Isabel must use every ounce of intelligence and cunning they possess to try to escape the grasp of this deadly trio. Historical fiction fans will eagerly await the couple’s further adventures. (May)

Correction: An earlier version of this review misspelled the first name of the Gerard Fox character. It also misidentified the authors as being husband and wife.

Broken Summer
Broken Summer
Jm Lee
Korean painter Hanjo Lee, the protagonist of this mesmerizing novel from Lee (The Investigation), must wrestle with his haunted, long-buried past. One summer day 26 years Continue reading »

Find Him
Find Him
Jake Hinkson
At the start of this exceptional tale of crime and courage from Hinkson (Dry County), 18-year-old Lily Stevens, who’s 25 weeks pregnant and the daughter of a Pentecostal Continue reading »
chevron_right