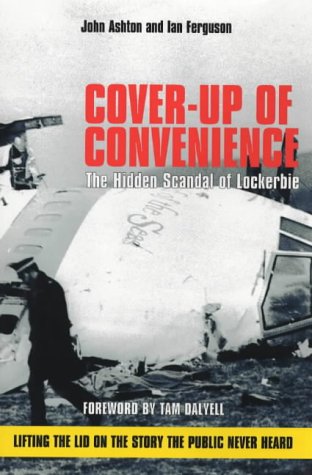 COVER-UP OF CONVENIENCE: The Hidden Scandal of Lockerbie

Until recently, the Pan Am flight 103 bombing ranked among the deadliest terrorist attacks against Americans. British journalists Ashton and Ferguson, who spent years covering the story, believe that the U.S. government deliberately ignored the actual perpetrators and falsely implicated two Libyans instead (one of them was convicted). The authors claim that the bombing was done by the Popular Front for the Liberation of Palestine, helping Iran avenge the 1988 downing of one of their civilian jets by the U.S. military. Ashton and Ferguson offer much evidence for this and also that the American government actively suppressed the story. According to them, a number of geopolitical factors motivated the coverup; most importantly, the bombers used a Lebanese drug smuggling route protected by the CIA. The PFLP swapped a suitcase of heroin for one with a bomb, knowing that the CIA would allow this heroin shipment to go through security unimpeded. Why? The U.S. had agreed to aid Lebanese drug runners in exchange for help freeing U.S. hostages in Beirut. Ashton and Ferguson clearly believe that a grave injustice occurred, and in their zeal they include more detail than the general reader may want to digest. Despite this quibble, their story is an effective reminder that, in the shadowy world of counterterrorism, it's hard to know who's telling the truth. 8 pages of color photos.

The Price of Terror