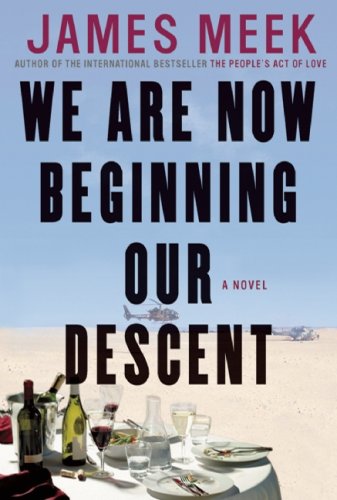 We Are Now Beginning Our Descent

The author of returns with the midlife deconstruction of a reluctant war correspondent working in post-9/11 Afghanistan. What Scots journalist Adam Kellas truly wants is to be a bestselling novelist, but he watches aghast on 9/11 as the planned climax of his latest thriller-in-the-works becomes reality in lower Manhattan. Disappointed, he puts down his manuscript, takes an assignment in Afghanistan covering the subsequent war and falls for an American journalist, Astrid, who leads him into a dangerous blurring of the lines between observer and participant. On his return to the U.K., these conflicts boil over when Kellas attends a dinner party with his poet school chum Patrick M'Gurgan. The fallout—combined with a large advance offered on his next thriller (an imagined war between America and Europe)—leads Kellas on a wild journey to see Astrid, who's living near Chesapeake Bay. Meek's novel exhibits some irritating tendencies—a muddled narrative line, a romance with a few cloying moments and overindulgent digressions into philosophy—but Kellas's unraveling is deliciously enjoyable, and Meek's crafting of character and setting is often masterful. The result is a book that demands much patience from the reader, but delivers rewards in return.